Berlin, January 10th, 2017 – Raisin proudly announces that at the end of 2016 it did not only celebrate the 3-year anniversary of its launch in Germany but also reached a milestone of EUR 2 billion in invested volume.

“Raisin is the only European startup on the investment side to have reached the amount of EUR 2 billion invested. As of today, over 60,000 customers from across the entire European Union have invested this milestone amount with Raisin’s 27 partner banks and put their trust in us.” says Dr. Tamaz Georgadze co-founder and CEO of Raisin. “This means that we have not only tripled the amount invested via our platform in 2016 but we have also added 15 new partner banks thus providing an unparalleled offer of savings products from across Europe to our customers.”

For 2017, Raisin plans to continue to provide savers across Europe with attractive and exclusive offers for their savings and to broaden its reach by offering localised platforms for additional markets, further broadening its partner bank offering and entering distribution partnerships with banks across Europe. 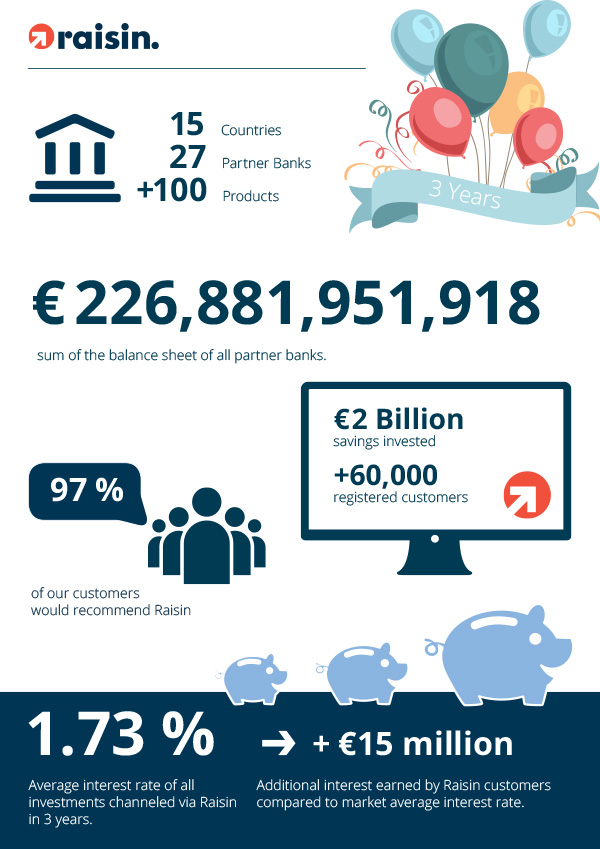 Under the brand WeltSparen, Raisin GmbH has offered an online marketplace for deposit products of partner banks in the European Economic Area since 2013. The Raisin platform is now available across Europe in English and localised platforms exist for Germany, France, Spain, and Austria. Raisin gives customers the possibility to open deposits at attractive interest rates across Europe free of charge. Previously, customers had to contend with varying, complex account opening procedures in foreign languages, sometimes requiring physical presence in the country. These are no longer a concern with Raisin.

All deposits are 100% guaranteed up to €100,000 per saver and bank by each national Deposit Guarantee Scheme in accordance with EU directives. Raisin does not charge any set-up fees and offers attractive interest rates via its 27 partner banks.